LIFE NaturArmy is an extension of an experiment conducted at local level as part of another LIFE programme, ‘Défense Nature 2Mil’. Under the new programme the French ministry of the Armed Forces is stepping up its actions to promote biodiversity.

Led by the French ministry of the Armed Forces working in conjunction with the network of Conservancies of Natural Areas (CENs), this project aims to improve the conservation status of the species and habitats that justified the classification of the military sites as Natura 2000 sites.

LIFE NaturArmy, which falls within the Governance and Information category, is intended to consolidate the armed forces’ role as managers of Natura 2000 through a strategy of intervention and communication at national and European level.

The preservation of biodiversity on the Natura 2000 sites under military control will be achieved by the end of LIFE NaturArmy by:

The good ecological management of at least 30,000 hectares of military land will continue, with the signing of 10 new agreements with the Conservancies of Natural Areas (CENs). 11,000 hectares on military sites classified as Natura 2000 will be subject to exemplary biodiversity-oriented management. A scientific quantification will be carried out of the high ecological value of the Natura 2000 sites under military control.

The communication component of the LIFE NaturArmy programme aims to publicise the actions carried out to promote biodiversity on military land.

Communication actions will also be conducted to raise awareness of the biodiversity strategy among French ministry of the Armed Forces staff and bring them on board. Thus over 100,000 MINARM managers and 100% of commanding officers, seconds-in-command, training organisers and military camp officers will be informed about Natura 2000. A Natura 2000 training programme will be made available to the armed forces. Two MINARM training schools will be involved in training future armed forces officers on the subject.

Places of experimentation and feedback 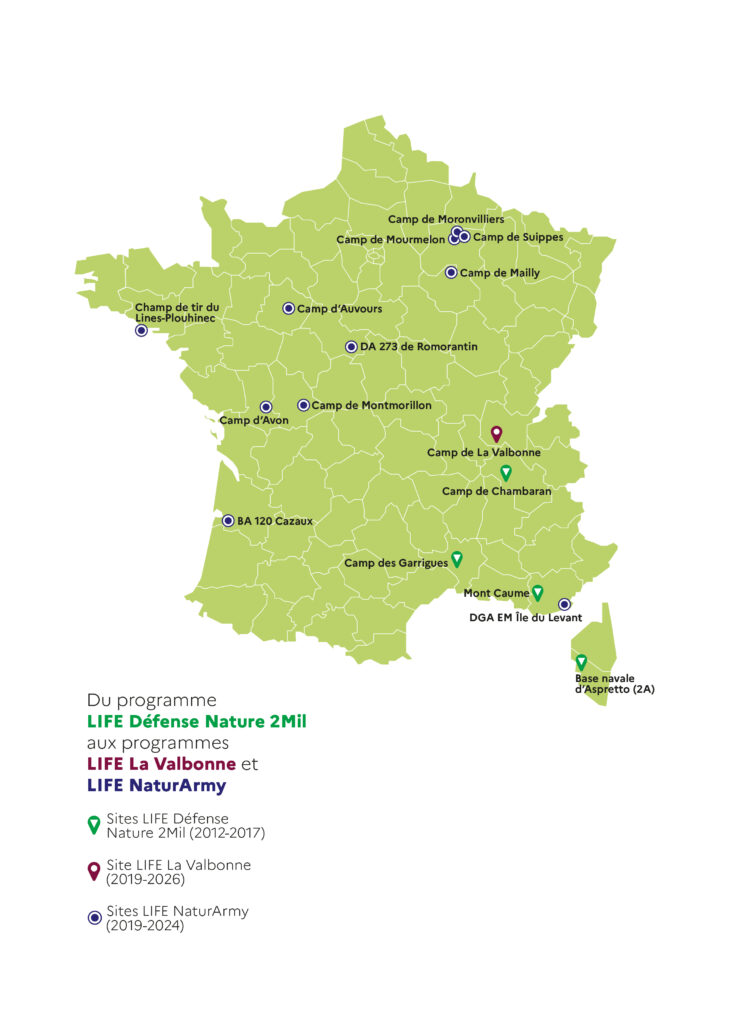 Find out the actions

Find out more information about the LIFE programme :

A project driven by :

With financial support from :

With technical support from :